Sam C. Dunton, the third of six staff photographers for the Wildlife Conservation Society, began his career as an apprentice tank man at the New York Aquarium in 1927 when it was located at Battery Park. He started taking photos at the aquarium in the late 1920s and added photography at the Bronx Zoo in 1942 after zoo photographer Edward R. Osterndorff’s departure.

Dunton was a productive proponent of animal photography and recognized as a filmmaker, still photographer, author, speaker, and educator. He wrote two books – Guide to Photographing Animals in 1956 and Hold That Tiger! in 1957. Dunton was a founder of the Biological Photographers Association.

Dunton gave numerous talks and radio broadcasts, and published photos and accounts on animal photography including a paper on the technique of snake photography published in the Journal of the Biological Photographic Association. His fascination with documenting unknown details of reptiles continued. According to the Society’s 1952 Annual Report, Dunton spent a good deal of time in cooperation with the Bronx Zoo’s Curator of Reptiles, James A. Oliver, working together on a motion picture on the locomotion of snakes (above). His single injury requiring stitches during his career was while photographing a Komodo dragon.

Bronx Zoo keeper Bob Terracuso worked at the zoo for 46 years. During that time, he helped four of the Society’s six staff photographers make their pictures. In the late 1960s and early 1970s, Terrascuso set up animals for Dunton to photograph. He recalls Dunton would spend hours patiently taking their photos. Terracuso describes Dunton as a very kind, polite, soft-spoken man – plump, with a tiny mustache, and always, a nearly spent cigarette in his mouth.

Dunton had 47 years of service with the Society at his retirement in 1974 – 40 of those years as staff photographer.

EDITOR’S NOTE: Thanks to Bronx Zoo keepers Natalia Hook and Bob Terracuso for providing details on this time in WCS history. The Wildlife Conservation Society is celebrating 125 years of saving wildlife and wild places in 2020. WCS was founded as the New York Zoological Society in 1895, and the flagship Bronx Zoo opened in 1899. Wild View will feature regular posts on the history of the Society’s photography and other events throughout the year.

First Photographer for the Bronx Zoo

LOVE these old photos and the history/story behind them!!

Thanks, Kathy! It is fun to look at WCS history and how photography has changed in the last 125 years. 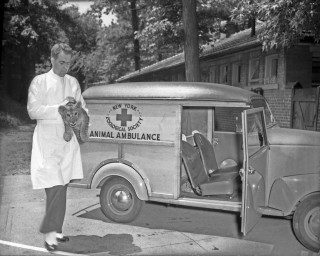