During a recent trip to the Bay of Fundy—home to the world’s highest tides—my wife and I purchased tickets for a wildlife cruise to observe some of the region’s marine mammal species. We saw harbor and gray seals, harbor porpoises, and my favorite whale species: the minke whale (Balaenoptera acutorostrata). It’s a small animal by whale standards (growing up to 30 feet at most—smaller than most whales), but still comparable in size and weight with the largest land animal, the African elephant.

Over the years, I’ve seen many minke whales (pronounced MINK-ey). In fact, my first encounter with a truly immense wild animal was with a minke whale at age 14, when I was a volunteer at the now defunct West Quoddy Marine Research Station in Lubec, Maine on the edge of the Bay of Fundy. I was enlisted as an explainer for the station’s visitor center (basically a two-car garage), where I gave tourists short lectures on the marine mammals of the Bay of Fundy, and sold t-shirts, posters, bumper stickers, and other “Save the Whale”-type souvenirs to generate revenue for the organization. However, opportunities for me to directly see whales and other marine life—the central focus of the station’s research—were rare; field work was largely the domain of older volunteers who were either college and graduate school students, but on one day I was asked to help gather data on an animal in distress.

In the 1980s, fishermen working in the Bay of Fundy were still actively using traditional fishing weirs—large, offshore structures made of long wooden posts and nets—to capture Atlantic herring and other schooling fish as the bay’s gargantuan tides receded from shore. Once filled, these bean-shaped fish traps were emptied by crews with smaller nets, which were used to seine out the fish. Occasionally, the weirs would capture something larger, and on one occasion in August 1982, that something was a 25-foot minke whale, which became confined inside a weir located just over the international border in the coastal waters of Campobello Island, a Canadian island best known as the former summer retreat of Franklin Delano Roosevelt. 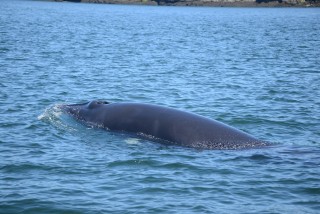