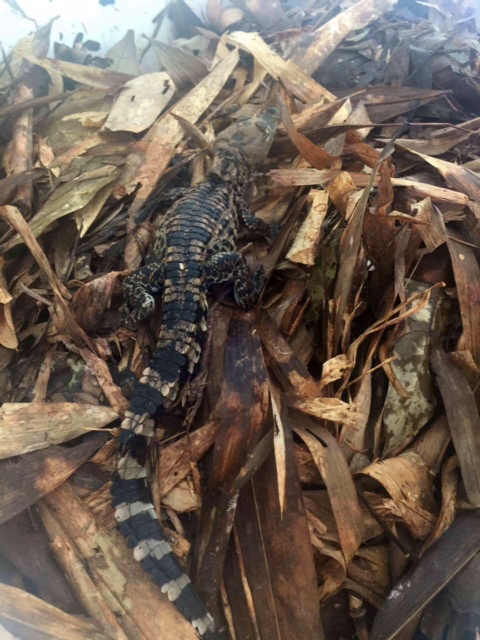 The Wildlife Conservation Society and Fisheries Administration (FiA) have been conserving the Siamese crocodile since 2012 in the Sre Ambel river system in Cambodia. On July 27, 2017, a team of two WCS staff and one FiA officer conducted a patrol and nest search in one of the six wetlands where the project is working to conserve the species. The project team, led by In Hul, found a clutch of 19 eggs in the Kean Tok wetland next to Sre Ambel river. This is the first nest to be found on the Sre Amble River in over 10 years even though adults have been seen in the area for some time. After finding the nest, the team relocated the eggs to a local guard’s house next the wetland. The team made an artificial nest using some nesting materials collected from the actual nest.

After about two weeks, the team including Som Sitha, Sun Yoeung, and Sam Han from Flora and Fauna International, and myself traveled up the Sre Amble River to the village where local guard’s house is located and inspected the eggs. They placed the eggs in two Styrofoam boxes in damp sand for a boat ride and then transported them overland to the WCS Reptile Conservation Center in Koh Kong. The eggs were set up in one big Styrofoam box using the same sand as a base and then covered everything with a mixed leaf litter similar to the original nest. The box was placed inside a converted shipping container that had a shade roof built over it. The inside of the container had been made into rooms that maintained a warm ambient temperature perfect for incubation.

It is a successful team effort. Our first hatchlings (above) emerged on August 8, 2017. 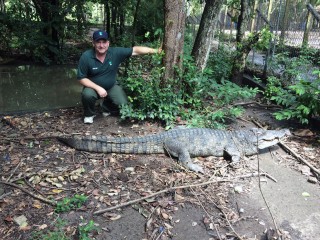